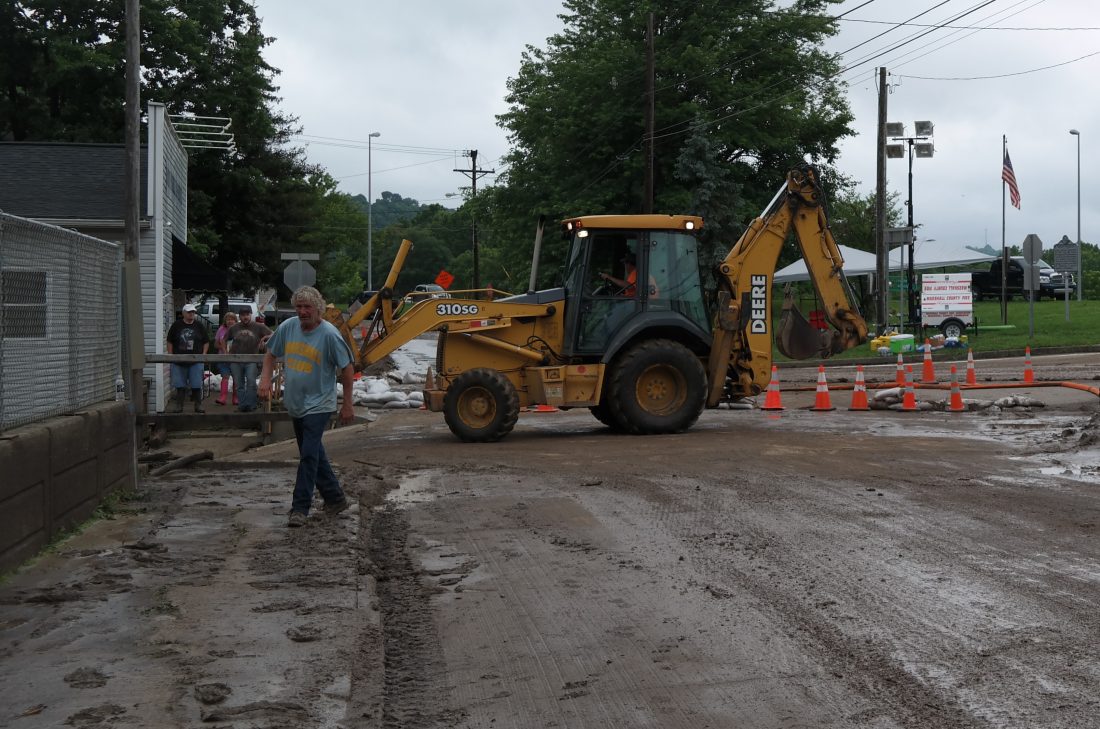 “It ain’t so bad that you got the water, it’s now you gotta deal with all this mud,” Green said.

Kady said Wednesday’s flood was just as severe as flooding that impacted McMechen in July of 2017, except this time it only hit the southern end of town. Creeks near 2nd and 9th streets were stable and remained within their banks, he said.

“That area down there, in my opinion, the reason why it flooded is because the culverts down there were not cleaned out sufficiently and they need to be maintained,” Kady said. “We also had a lot of runoff from the hillside, and we had a lot of silt down on Marshall Street, which doesn’t come from the creek, it comes from the hill.”

Kady also attributed pipeline work near Reilly Road as a factor that made the flooding worse.

“They got a lot of areas there on Reilly Road where the road’s about ready to go, and (there’s) a lot of water running off the hill from where they were putting the pipeline down,” he said. “It all comes down the hill into town, and unfortunately the people down there have to suffer for it.”

Both Kady and Green said that they believe the flooding could happen again fairly easily.

“If we were to have another event, maybe not even heavy rain, moderate rain, we’re probably going to have this reoccur,” Kady said.

The area saw from one to 2.5 inches of rain on Wednesday night, according to the National Weather Service in Pittsburgh.

“That’s quite a bit of rain for this area,” meteorologist Michael Brown said. “When you have that much rain over a couple hours, especially in this terrain, you can get some quick flash flooding. It’s generally a very susceptive area.”

Kady added residents in the area should try being prepared as much as they can for flooding.

“There isn’t much residents can do in this situation,” he said. “Try to keep your heavier items out of the areas that flood so that you can quickly move things up to higher ground in the house.”

“Part of the preparation needs to fall back on the city and county, and everybody else,” Kady continued. “Some of the drainage ways there are not sized properly, some of them bottleneck, some have 90-degree turns, all of which contribute to the fact that they don’t handle the water.”

Benwood resident Jim Howard, standing with Green and others at the site of the cleanup on Marshall Street, said flash floods from the hillside and creeks are worse than river floods because of all of the mud leaves.

“This is the worst kind of flood you can have, these flash floods. It just brings it up,” he said.

Other areas in the Ohio Valley saw damage from rainfall on Thursday. Ohio 7 between Toronto and Empire was closed in both directions because of a large landslide that happened early Thursday, the Ohio Department of Transportation reported.